Founded in 1999 with the aim of celebrating the work of Alister MacKenzie as a golf architect in Great Britain and Ireland.

The Society was founded in 1999 to celebrate the work of Dr. Alister Mackenzie as a golf course architect in Great Britain and Ireland through the fellowship of golf. The Society now has a membership of 62 clubs and, as more clubs delve into their archives, the hand of MacKenzie continues to be detected.

There is annual inter-club match for the Mackenzie Medallion, first played at Alwoodley in 1999 but subsequently on a different MacKenzie course each year. To commemorate the partnership of Mackenzie and Harry Colt from 1919-1923, the club winning the Medallion is invited to Stoke Park Club (a Harry Colt design) to play for the Challenge Cup against the club winning the Colt Cup. A list of past winners of all these matches can be found on this site.

The list of winners and the list of future hosts can be found here on this site. 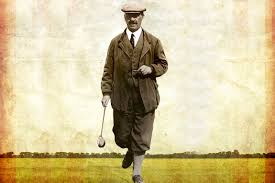 In 2008 the Committee decided to introduce an Individual Membership, open to all adult members of Society clubs, and to arrange up to 6 events each year for members and their guests. An annual match against the British Golf Collectors’ Society is held. Numbers are limited to ensure that match entries can be accepted from individuals belonging to a broad range member clubs.  There are now over 80 individual members and 30 member clubs.

A very comprehensive chronology of MacKenzie’s life and work has been compiled and recorded on line. Material is still being added, but Download the Chronology here.

We have an interesting diary document about Alister MacKenzie known as The Chronology. It shows what he did and where he was from his birth on 30th August 1870 in Normanton in Yorkshire, through his time at School and University, to his early death on 6th January 1934 in California.

In 1987 contacts were made between members of several clubs owning courses designed by Alister MacKenzie in California. This led to the forming in 1995 of The MacKenzie Society (www.mackenziesociety.org) which is limited to 15 MacKenzie golf clubs worldwide.

A meeting is held each year at a member club in order to further the Society’s aims which include ‘to locate, identify, and preserve information and documents relating to Dr Alister MacKenzie and his work’. There are no formal links between the two Societies